The Cold Brew & Nitro History in a nutshell Where did we come from and were are we heading to?

For me, and most people, it really started in 2007 when Jason Scherr, owner of Think Coffee Company, started making Cold Brew coffee. It became a huge hit in the underground coffee community in New York and soon fanatic barista's and coffee bloggers like Roberto Bergami started writing about it.

The recipe used in those days is still there and most popular. They called it Cold Brew referring to the temperature of the water used in this technique, where you leave coffee ground and cold (or room temperature warm/cold) water sitting overnight in a tubby/toddy/bucket. The day after you filter it, cool it and serve it.

When asked people what they liked about it, the answer is very simple 'less acidity'. Cold Brew coffee has up to 65% less acidity compared to regular coffee because hot water is not involved. Hot water mainly pulls out the oils carrying acid in the coffee beans. The result is a much smoother taste, so whether you have a sensitive stomach or not you'll love it.

I guess the high caffein dose also helps the people soothing their addiction.

It must have been around that period that Blue Bottle and Stumptown took the plunge and commercialized the cold brew, by selling it in cans, bottles and tetra brick in super markets. The most remarkable thing about these cold brews, was that Blue Bottle used chicory in their cold brew coffee blend, and still does today!

In their own shops Blue Bottle had big slow drip equipment stealing the show and this was also our weapon of choice when we moved our main bar to Mechelsesteenweg in 2012, although we kept things modest using the good old Hario Slow Dripper. As far as I remember we used this magical 40 by 40 recipe, using 40 grams of light roasted coffee with 40 degrees lukewarm water and 600 grams of total water weight and a 2-hour drip routine. The grind was in between espresso and filter.

This brew also needed an overnight fridge rest to fully blossom and had great bourbon notes in it. We loved it a lot and the demo part on our bar drew a lot of attention.

These slow drippers are very expensive and take up a lot of space on your counter. Luckily there are alternatives for sale, but a very easy alternative technique is a slow drip using the aeropress. Take around 30 grams of (light roasted) coffee and grind fine. Drop it in the Aeropress, classic upwards routine, add some cold water till the (4) marker. Leave it dripping till it's over - hard to tell how long it takes, but hopefully a minimum of 30'. Cool it, dilute if necessary, serve it (on the rocks), enjoy.

After one summer of slow dripping we couldn't follow the high demand any longer, started testing different techniques and switched to Flash Brew.

Simple said: Flash Brew is your regular pour-over coffee, but with a little hot water taken out and a bit of ice thrown in. In all variations of this drink, brewed coffee is diluted over ice to bring down its temperature. Because manual pour over would take us too long so we asked our Bunn Batch Brewer to give us a hand and soon we had plenty of iced coffee available.

The flavors of a flash brew are still not as spectacular as the hot variant but it quickly became clear it was way more clean and fruitier than a classic cold brew.

To market all this we started filling up bottles, already in 2014, and called it Iced Black. It became very popular at Caffenation and soon after some other espresso bars started doing the same concept, although mostly with classic cold brewed coffee.

When we moved the roastery to the Pakt site in 2017 a lot of things changed over those 3 years of Iced Black, with higher bean quality as being the most significant one.

When using cooled down batch brews around the 2010 era we didn't like the results very much, but so many years later our filter roasted Kenya's became so clean and full of flavor, and also our Brita filtered water improved a lot, that experiments with it resulted in a change of plans at the opening of Caffenation Pakt, now 4 years ago. We were using exactly the same recipe as for our normal filter procedures and gave the brew a 1 hour cooling before pouring it into 33cl (beer) bottles, then storing it in a fridge and ready is Freddy. The result was a crisp and clean iced coffee that fitted really well in our 'coffee is fruit' mantra/philosophy.

Advantages were obvious: fast, cheap and everybody could make it in a finger click and consistent. We even discovered that (not too far faded) left over filter coffee at the end of the day could easily be recovered.

But where stays that bloody Nitro from the title now?

Nitro Cold Brew is the most used term. The coffee is the same but it is infused with nitrogen and the biggest difference between a nitro brew and a classic cold brew is texture. While both of these iced options are subtle and sweet in flavor, a nitrogen cold brew delivers a super-smooth, rich body with a foamy top similar to your favorite draught (Guinness) beer.

Nitrogen is used to increase serving pressure without increasing carbonation.

At Caffenation we installed a Nitro machine already in Spring 2017. There were different systems on the market to prep bubbly coffee, but this machine turned out to be the real game changer. Sales of iced coffee doubled over night and we can't see us a life without Nitro coffee. 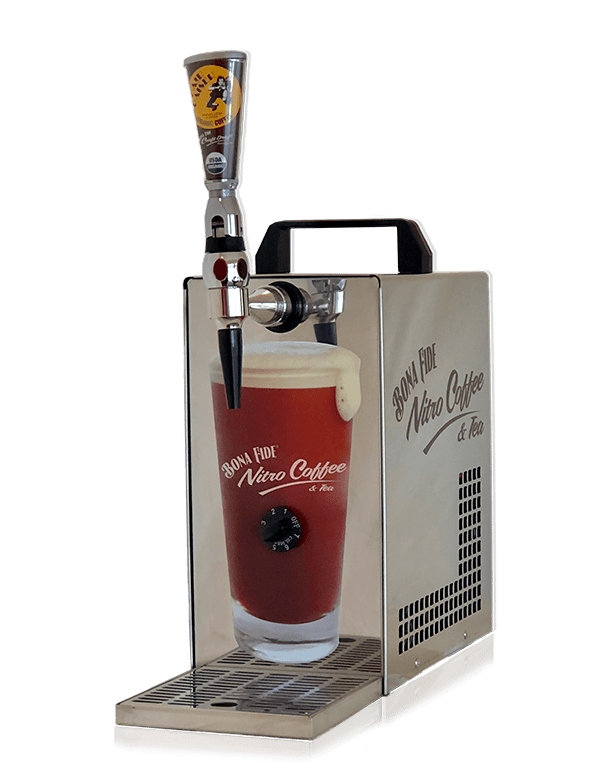 Main problem is the expensive equipment and extensive maintenance it needs. This is also the reason why we don't have one at Caffenation Pakt.

Nitro canned coffee is the new big thing in Specialty Coffee right now though and therefore we are working hard to get these type of cans in all our bars - yes we won't forget Amsterdam - in the future. Not sure yet if we are going to outsource this or doing it by ourselves..... more info to be followed soon.

Now to finish off: what type of coffee and roasting style do you need?

We at Caffenation believe the cleaner the better, so please don't go for cheap nutty natural Brazils, but stick to the fruitier stuff like Eastern African origin coffees. Nice fruity naturals (Centrals or Africans) could also give a real tasty result. Or Specially processed Anaerobic, Macerated, whatever that floats your boat.

And of course run away from dark roasted beans. If you do like this this type of profile then I don't see why bother brewing yourself and better buy the pre canned stuff you find at your local supermarket.

To end with a couple guidelines to help you brewing:

Average ratio's grams of coffee versus grams of water :

This should be a good starting point, all ground for filter/Aeropress.